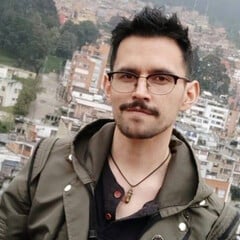 My name is Juan Pablo Corredor I'm a half artist, half designer who solves visual problems with an experienced knowledge in anatomy, composition, color, light and graphic concept.
I have been involved in many projects as an artist which includes clients like , Maloka, Wacom, Forja Studios, Cocodrillo dog games,Utility NYC, 3D total among others.